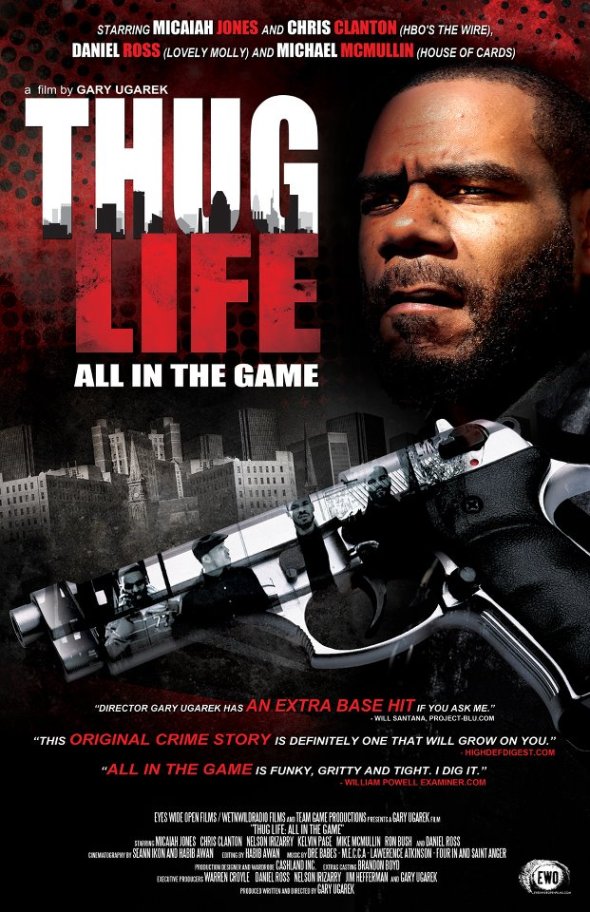 Ontario, Vince, Lucky and Littles, friends since birth, brothers till death. Coming from nothing they have begun to find themselves engaged in the ruthless Baltimore drug trade. They will stop at nothing to take control of it all, including taking out the most powerful mobster of the city – Michael Caprisci. As they systematically begin terminating the competition they have to engage a tangled yet simplistic plan to get Caprisci out of the game using of all people, his son Nicki, a slick, fast talker who prefers booze and women over his father’s lifestyle. In the end, Nicki’s drug problem will aid the group in bringing his father down. As the plan develops, Ontario finds out that some of his own rank and file are conducting business behind his back. He needs to send a message to let them know who is in charge, but when one of his closest allies ends up starting a war, he has to make a decision on what is more important, business or friendship. So as the war begins, who will win? Or in this game…is there really a winner? Thug Life is an in depth look into the world of street crime and those who rule the streets.

“Thug Life: All in the Game” is a very realistic and believable gangster film that keeps you at the edge of your seat the entire time. Most of us have no idea what it’s like to live the way these guys do and I’m sure we are grateful we don’t either but the film does a terrific job at showing us that way of life in a in your face and powerful way. The decision to shoot the film in black and white was a very good idea as it adds plenty of grit, mood and style to the story.

The story follows a “firm” on the streets of Baltimore as they attempt their way up the latter to claim more territory in a bold and brutal scheme. The film depicts these guys as relentless and without regard for human life, in some cases not even their own. Sadly what is shown is reality, it happens everyday in almost every city, it’s pretty scary to see the way some parts of society behaves.

Director, Gary Ugarek did a brilliant job in creating a believable gangster film and his cast did an amazing job playing their characters in a realistic and powerful way. There are several very memorable scenes in the film, it is a film that stays with you long after it’s over. I would like to see a sequel for this, there’s plenty of story to tell if they choose to do so. I am not a big fan of the genre but this is certainly one of the more realistic of it’s kind I have seen.

If you like the genre then I highly recommend picking this film up when it comes out on DVD October 16th, you can Pre-order it HERE

“Thug Life: All in the Game” is a brutal and honest look at life on the streets, it’s not pretty but it sure is effective. I really enjoyed it and look forward to seeing what this talented film-maker has coming out next.

Released by Open Your Eyes Films

ALL IN THE GAME TRAILER

Wishing a Happy Birthday to my heartbeat 🖤💚💘 Hoping today is wonderful, and that you enjoy yourself!
Just wanted to wish this pretty woman 🖤😍😘 @lexisdaynese a very happy birthday! Smart, strong, beautiful, Independent, and much much more! Hoping your day continues too surprise you, and tears continue to show. Love you Happy birthday 🎉🎊🎉🎊🎁🎈🎂👑💚💚💚
#2years... Mannnnnnnnnnnn listen 🖤💚 still sitting here thinking about this 😢😊🙃😍😙😚😘 @lexisdaynese #StillHere #Anniversay #WeMadeIt
Nice 👌🏾
🤷🏽‍♂️🤦🏽‍♂️😓😫 ...
Florida coolin 😜🙌🏾👌🏾
Gdmorning everyone I just wanted to say thank you for all of your support ! So far #TalesfromShaolinPartOneShakeyDog has screened in PHILLY, Harlem, DC, and in September we'll be screening in Newark! This has been a hell of a ride so far and thank you joining us on it! "I'm nothing without you" Dominique Antonio Spencer👌🏾🤘🏾💪🏾😓 #allthelaurels #blackdreamsmatter #TheMomentisHere #BuckleYourSeatbelts #Frank #Ghost 🎬🎟🏵📸
😈
😈
😈
Words can't say how proud I am - I love you bro and thank you for having me & mines present ! I'm always here #youngkings love you here @uncle_d3v
TunnelVision ... So ready to get back in front of the camera I can taste it! But until then you can find me here #workflow
Another day ... Think ima binge #Insecure ...
We have been selected and will be screening at the #hiphopfilmfestival on August 5 @930! If you're in the area show up & show out! We have also been nominated for two awards!! Our very own, GHOST played by @stephenhillacts for best Actor & Best in Show! Wish us luck on gathering both of these very prestigious awards! Thank you all for the continued support! -I'm nothing without you DaS #actor #actorslife #TalesfromShaolinPartOneShakeyDog #Frank #DominiqueAntonioSpencer #Das #festival #Shortfilm #Urban #Crime #Drama #Action #Gangsta #WuTang #GhostfaceKillah #ShakeyDog #awards #allthelaurels #NY #NYC #HollyBlackWood "Come on Frank, the moment is here" 🤘🏾💪🏾🙏🏾🎬🎟💯
DOMINIQUE ANTONIO SPENCER in the role of FRANK in the film TALES FROM SHAOLIN PART ONE: SHAKEY DOG 🤘🏾💪🏾🙏🏾💯🎬 Selected into these film festivals- NY HIP HOP FILM FESTIVAL, BLACK STAR FILM FESTIVAL, DC BLACK FILM FESTIVAL #actor #TALESFROMSHAOLINPARTONESHAKEYDOG #FRANK #FILM #Urban #Crime #Drama #Shortfilm #WuTang #lead #colead #Philly #NY #Dc #WashingtonDC
The film "Tales from Shaolin Part One: Shakey Dog" has been selected and will screen at the first annual DC BLACK FILM FESTIVAL AUGUST 17-19! Washington, DC The Miracle Theater We hope to see you there! #filmfestival #screening #allthelaurels #actor #colead #FRANK #TeamShakey #DCBFF #DAS #DominiqueAntonioSpencer stay tuned for more details!
Another day at the office...grateful 👌🏾💪🏽✈️🛩
😍❤️
On the way to #DaveandBusters with my lil monster 😍
"I thank you...I thank you...I wanna thank you, I need to thank you cause you made me hustle"- 🎼🎧🎤#Np #Future #HNDRXX #IThankU 🙌🏾🙏🏾🤘🏾🤘🏾🤘🏾