“The only thing that ever got in crime’s way were the criminals”.

Stone-faced crime boss Theresa James (R & B artist/actress Tia Dae) delivers a lengthy allocution on criminal behavior to Marcell (Dominique Spencer), an underling who has unknowingly been caught with his hand in the proverbial cookie jar. Her words are wise, even poetic, though it seems like an awful lot of wisdom (and creativity) to waste on someone who’s about to get waxed. “Welcome to your future,” she says as he meets his demise.

thickIt’s to be expected, I suppose. These guys never seem to pick up on insinuation, even when they know they’ve messed up (an exception would be the guy from “Lethal Weapon 2” who wanted to make sure he wasn’t standing on plastic when summoned into the boss’s office). And almost invariably, the turgid speech that precedes their punishment serves only to emphasize the unhealthy ego of the speaker – often an overblown or cartoonish villain with little substance to their words.

If “Thick” starts off looking a touch self-important, it quickly finds its equilibrium within the stage-worthy performances and a script that has something to say. Dae’s monotone Theresa is less sinister than pragmatic, possibly a metaphor for the country’s pre-occupation with work and financial stress, among other things. She fits the bill as the steely-eyed crime boss, virtually disconnected from anything that might distract her or expose a weakness. Her position, as we see, is a precarious one, and somewhere beneath the virtually expressionless demeanor lies a deep-seated paranoia, which bubbles over when her wife Roni (Pascale Piquion) shows even the slightest hint of independence.

The film is part “The L Word”, part “King of New York”, and Dae’s character, who is both protagonist and antagonist, owes a little something to Christopher Walken’s Frank White, who occasionally liked to unload his intellectual side on a disloyal employee or two before burying them with their betrayal money. But this ain’t the ’80s, and a relatively meager $500,000 in “get out” money stashed in Theresa’s house suggests that times are tough, even for less legitimate business enterprises.

Scheming employees, dirty cops, and a deteriorating personal life are part of this nasty equation. Trusted advisor “Lefty” Eggleston (Ronald Benson-El) plots to take over the empire while assassin Nina (Chaseedaw Giles) plans to run off with Roni , with whom she’s been having an affair. And the crooked detectives in Theresa’s pocket (Caleb Jackson and Mick McGuire) are looking for an early out, and a hefty retirement package to boot.

It might sound like it’s gearing up for a finale like “True Romance”, but “Thick” is definitely more chess match than bloodbath. The characters, though, are no less cut-throat than in more violent contemporary urban crime dramas. Save a few requisite executions, which are carried out in shadowy Washington, DC area settings like a sewer tunnel or in the back seat of a car, we mostly watch our characters manipulating their way to what they want. Local writer/directors Cheryl Brown and Anthony M. Greene (“The Henchman’s War”) have crafted something that looks like a CliffsNotes for an HBO drama series, tightly cinched in a 70-minute package. The micro-budgeted “Thick” covers a lot of ground while never appearing overly ambitious, with fine editing by Omar Juarez (who is also the cinematographer) and Manuel Santos. There are many earmarks of a great crime saga here, and it will be interesting to see if Brown and Greene revisit the material.

about the author: michael parsons

Husband. Father. Ex-salesperson. Movie nut. After pestering my parents for their commentary on “Star Wars” when I was four years old, my mind went into a creative frenzy. I’d imagined something entirely different than the actual film, which I didn’t end up seeing until its 1979 re-release at the Uptown Theater in Washington, DC. This was my formal introduction to the cinema. During that long wait, which felt like an eternity to a child, my mind was being molded by more corrosive stuff like “Trilogy of Terror” and “Rosemary’s Baby”, most of which I’d conned various babysitters into letting me watch on television ( I convinced one poor lady that “Jaws” was actually “Moby Dick”). The folks were pretty strict in that regard, so the less appropriate it was for a kid to watch, the more I was fascinated by it. Horror staples like “Halloween” and “Friday the 13th”, as well as lesser-known low-budget fare like “Madman”, “Sleepaway Camp” and “Pieces” all ended up sneaking their way into the VHS on a regular basis. Since then, I’ve developed an obsession with the entire film industry. Even though I watch and review a wide breadth of films these days, my appreciation for the campy, poorly lit micro-budgeters still lends itself to my evolving perspective on movies just as much as the summer blockbusters and Oscar contenders. As I recall my trips to the movie theater, I realize that this stuff is about much more than just a fleeting piece of entertainment. A couple years ago, I was finally given the opportunity to lend my opinion on films to a publication, The Rogers Revue, with a subsequent run at Reel Film News. It’s been both a privilege and a gateway to what we’re doing now. Most of my experience has come from interviewing independent filmmakers, who consistently promote innovation. The filmmaking process is grueling and relatively unforgiving. Fellow film enthusiast Eddie Pasa and I have created DC Filmdom as a medium for film reviews, discussion, and (inevitably) some debate. And so, the creative frenzy continues. (Michael is a member of the Washington, DC Area Film Critics Association).

Hey guys
I really gotta make updating this a priority BUT I am here to play catchup. Now the last time we spoke, Anthony Greene’s “THICK” had already screened I believe twice … BUT here is some news for you … THICK since then has screened 2 more times! Again in Washington, D.C at Busboys and Poets (dope ass spot) and we brought it to screen in my hometown, Baltimore, M.D at the Landmark Theater, downtown HarborEast! It was a sold-out crowd in DC & and a sizable one at the Baltimore screening!
“Busboys and Poets 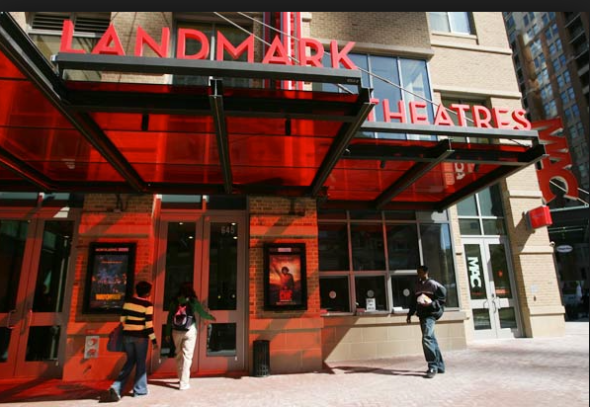 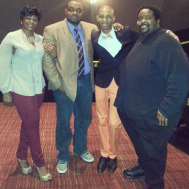 As far as whats next for “THICK” … you’ll just have to stay tuned ! But as always thank you everyone for your time and support on this fantastic production. I have attended every screening for the film and the response has been phenomenal! We cannot thank you enough!

And if you haven’t seen the trailer you can check it out below. In the film I play the role of “Marcel”. Also check out the “Skyrocket Productions” film page for updates pertaining to “THICK” and other productions out of their camp https://www.facebook.com/SkyrocketProductions . 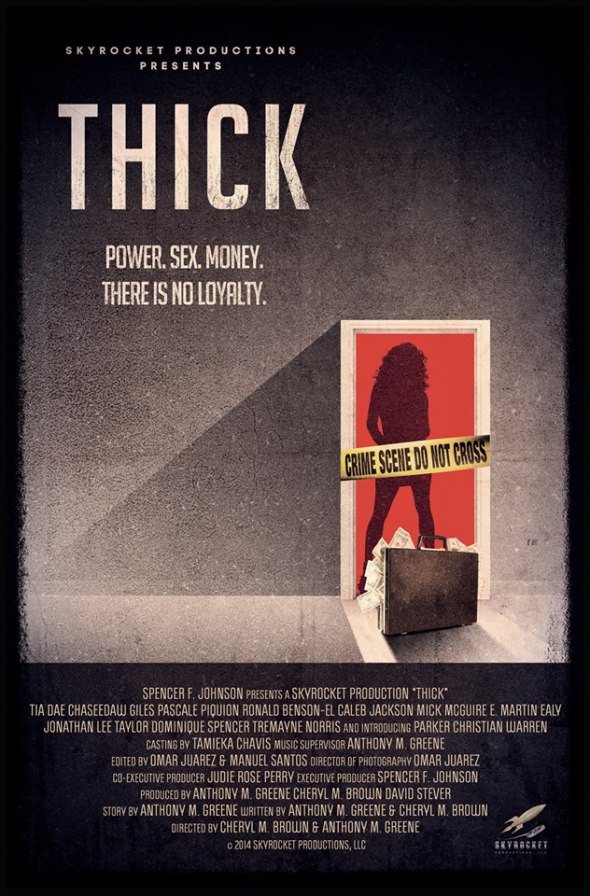 Hello everyone,
Above is the alternative Theatrical Poster for Anthony Greene’s Feature length Crime-Thriller “Thick“. In the film I play the role of “Marcell”. As always #Staytuned for updates regarding this production. Also, if you havent already like the production company’s Official Facebook page at:https://www.facebook.com/SkyrocketProductions. Not to mention if you havent already “Like” my Facebook page as well at:https://www.facebook.com/pages/Actor-Dominique-Antonio-Spencer/104852579588294 . Thank you everyone for your time and support!
#Blessed
#teamDAS

Be sure to visit my Facebook Page: https://www.facebook.com/pages/Actor-Dominique-Spencer/104852579588294 to see the first official trailer for Anthony Greene’s Thriller “THICK” You can also see the trailer above as well ! You can check out the current theatrical poster “as seen above” for the film as well =) As always you can check back here for updates on the films production OR you can check in at the film’s Official Facebook Fan Page at: Please watch it, enjoy it, love it ! #THICK In the film you can see me in the role of “Marcel”

Im just playing catchup here and filling you guys in on what happened late last year! Well you all remember me blogging about AGreene’s Thriller “THICK”! Well it had its first screening at last years #RIFE film festival. For those who may not know what RIFE stands for, its short for “Reel Independent Film Extravaganza” ! Here numerous films are screened from all over the world, awards are given to films, and actors alike ! It is just a wonderful event that has been taken place for a number of years and is spearheaded by AGreenes production company “SkyRocket productions“! BUT theres more! The first screening of “THICK” was SOLDOUT as well as the Second Screening !! Frickin AWESOME !!I also have some pics of the cast/crew as well at the event(RIFE) for the films first screening ! Twas an awesome night and Im just thankful to have had the opportunity to be present !

Again #StayTuned for production updates regarding this film and check out some photos below of the cast and crew below !!
Blessed
Dominique Antonio Spencer
#teamDAS

Wishing a Happy Birthday to my heartbeat 🖤💚💘 Hoping today is wonderful, and that you enjoy yourself!
Just wanted to wish this pretty woman 🖤😍😘 @lexisdaynese a very happy birthday! Smart, strong, beautiful, Independent, and much much more! Hoping your day continues too surprise you, and tears continue to show. Love you Happy birthday 🎉🎊🎉🎊🎁🎈🎂👑💚💚💚
#2years... Mannnnnnnnnnnn listen 🖤💚 still sitting here thinking about this 😢😊🙃😍😙😚😘 @lexisdaynese #StillHere #Anniversay #WeMadeIt
Nice 👌🏾
🤷🏽‍♂️🤦🏽‍♂️😓😫 ...
Florida coolin 😜🙌🏾👌🏾
Gdmorning everyone I just wanted to say thank you for all of your support ! So far #TalesfromShaolinPartOneShakeyDog has screened in PHILLY, Harlem, DC, and in September we'll be screening in Newark! This has been a hell of a ride so far and thank you joining us on it! "I'm nothing without you" Dominique Antonio Spencer👌🏾🤘🏾💪🏾😓 #allthelaurels #blackdreamsmatter #TheMomentisHere #BuckleYourSeatbelts #Frank #Ghost 🎬🎟🏵📸
😈
😈
😈
Words can't say how proud I am - I love you bro and thank you for having me & mines present ! I'm always here #youngkings love you here @uncle_d3v
TunnelVision ... So ready to get back in front of the camera I can taste it! But until then you can find me here #workflow
Another day ... Think ima binge #Insecure ...
We have been selected and will be screening at the #hiphopfilmfestival on August 5 @930! If you're in the area show up & show out! We have also been nominated for two awards!! Our very own, GHOST played by @stephenhillacts for best Actor & Best in Show! Wish us luck on gathering both of these very prestigious awards! Thank you all for the continued support! -I'm nothing without you DaS #actor #actorslife #TalesfromShaolinPartOneShakeyDog #Frank #DominiqueAntonioSpencer #Das #festival #Shortfilm #Urban #Crime #Drama #Action #Gangsta #WuTang #GhostfaceKillah #ShakeyDog #awards #allthelaurels #NY #NYC #HollyBlackWood "Come on Frank, the moment is here" 🤘🏾💪🏾🙏🏾🎬🎟💯
DOMINIQUE ANTONIO SPENCER in the role of FRANK in the film TALES FROM SHAOLIN PART ONE: SHAKEY DOG 🤘🏾💪🏾🙏🏾💯🎬 Selected into these film festivals- NY HIP HOP FILM FESTIVAL, BLACK STAR FILM FESTIVAL, DC BLACK FILM FESTIVAL #actor #TALESFROMSHAOLINPARTONESHAKEYDOG #FRANK #FILM #Urban #Crime #Drama #Shortfilm #WuTang #lead #colead #Philly #NY #Dc #WashingtonDC
The film "Tales from Shaolin Part One: Shakey Dog" has been selected and will screen at the first annual DC BLACK FILM FESTIVAL AUGUST 17-19! Washington, DC The Miracle Theater We hope to see you there! #filmfestival #screening #allthelaurels #actor #colead #FRANK #TeamShakey #DCBFF #DAS #DominiqueAntonioSpencer stay tuned for more details!
Another day at the office...grateful 👌🏾💪🏽✈️🛩
😍❤️
On the way to #DaveandBusters with my lil monster 😍
"I thank you...I thank you...I wanna thank you, I need to thank you cause you made me hustle"- 🎼🎧🎤#Np #Future #HNDRXX #IThankU 🙌🏾🙏🏾🤘🏾🤘🏾🤘🏾